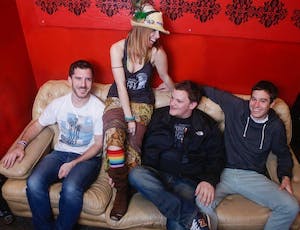 Pixie Jones is a singer/songwriter based out of Washington, DC with a wide range of influences that include Stevie Nicks, Ann Wilson, Lauryn Hill, Etta James, Amy Winehouse, Janis Joplin, Mary J. Blige, Joan Jett, Gwen Stefani, Pharrell Williams, Patsy Cline, & Brandon Boyd just to name a few. With her bandmates Tiptoe Disco, she loves to dabble in multiple genres so their show will treat you to slices of rock, reggae, alternative, jazz, & more.

She began cutting her teeth in the DC/MD/VA music scene back in 2004. As a guest vocalist for reggae rock band Jackie Gino, she performed with them over the next couple years including a special showcase in Freeport, Bahamas alongside local legends & winners of DC 101's "Last Band Standing" contest Rude Buddha.

In 2006, she broke out with hard rock outfit Broken Element. They were successful in Bodog's Battle of the Bands, featured on 98 Rock's "Noise in the Basement" show, & made their way onto the Flipside Festival lineup alongside All Time Low, Cartel, Motion City Soundtrack, Silverstein, & more.

Fast forward a few years, she then teamed up with local guitar hero and Billboard Award winning songwriter Nick Samuels to form the band Daughter of Stars. Inspired by bands such as Heart, Led Zeppelin, & Wolfmother, they emitted a bluesy hard rock vibe. They gained quite a bit of local buzz before eventually disbanding in 2012.

Then in early 2013, after trying on different musical glass slippers, she found the one that fit the best...kind of by happy accident. T'was a fun very casual jam session amongst long-time friends. That session turned into the urban roots rock fusion project Tiptoe Disco. They quickly gained a following with their tight 3-part harmonies, catchy hooks, & infectious stage energy. They had the honor of playing NoahFest 2013 alongside remarkable jam scene acts Big Something and Proverbial and then again in 2014 with prominent artists The Fritz and Big Daddy Love. They ended up parting ways in 2016 and Pixie then took a break from the stage for a couple years. That time left an itch to scratch though as they all could not ignore or forget their undeniable musical chemistry so, in late 2019, they reformed again. Tiptoe Disco featuring Pixie Jones are back and can't wait to see your beautiful faces at their next show!