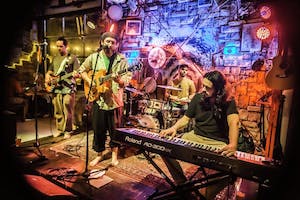 iCal
Google
This show is free and open to the public, no ticket required

Formed in 2013 Somatic has been through several incarnations. With a common passion for live music all the members bring something different to the table. Max Kipnis formerly of the (Okaloosa Sound) plays guitar and sings. Stephanie Perez plays a fiery lead guitar and sings vocals. Sean Hartley (Antelope, Broke Mr. Jones, Funky Seeds) holds the bass down keeping everyone in rhythm. John Hetherington (The Hydramatics) brings a Classical and Jazz approach to the keys glueing the whole show together. Charles Bianchet is currently studying Jazz Performance at USF and brings a solid rock foundation for the band to build upon. Somatic draws influences from artists such as ; String Cheese Incident, Ween, John Scofield, Massive Attack, The Allman Brothers, The New Mastersounds,The Beatles, Moe, The Grateful Dead, The Roots, Tycho, G love, Stevie Wonder, Vulfpeck, The Monophonics, Anderson Paak, NOFX. With an Ep release in the works, Somatic is slated for a fantastic rest of the year and will continue to make waves in the Southeast bringing their unique jam-band style to a town near you!