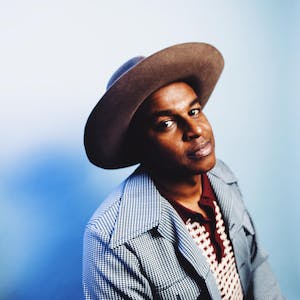 Sinkane music -- every note of it -- comes straight out of a generosity of spirit. Never has that spirit been on more vivid display than on the uplifting new album Life & Livin' It. This is feel-good music for trying times, celebrating what makes life good without ignoring what makes it hard.

By the time they finished touring for their acclaimed Mean Love album in late 2015, Ahmed Gallab and the band had spread the gospel of Sinkane to the world, playing 166 shows in 20 countries. During the same period, he had also led The Atomic Bomb Band -- the highly celebrated 15-piece outfit that played the music of elusive Nigerian electro-funk maestro William Onyeabor. The band included David Byrne, Damon Albarn, members of Hot Chip, LCD Soundsystem, The Rapture, Jamie Lidell and legendary jazz musicians Pharoah Sanders and Charles Lloyd, and they played all over the planet, including making their TV debut on The Tonight Show with Jimmy Fallon. "Those 14 months really changed my life," Ahmed says. "Not only did I learn how to put on a bigger show, but all that touring brought Sinkane closer as a band."

As Ahmed got into the depths of writing for Life & Livin' It, he had a clear goal; to conjure the ups and downs of a universal experience, and have fun while doing it. "I would listen to my favorite records, like Funkadelic's America Eats Its Young, and realize how great they made me feel. That carefree, light and fun feeling I was getting while writing this record is what I want everyone to feel when they listen to it."

Ahmed soon brought the band in to help with the material, testing the songs at a four-show residency of sold-out shows at Union Pool in Brooklyn where the audience's reception fed the creative process. They toured throughout the summer before setting up shop at Sonic Ranch Studios in El Paso, Texas. Once again produced by Ahmed with lyrics and help from longtime collaborator Greg Lofaro, the album draws from the best elements of Sinkane's previous records: the slinky funk and soul grooves are there, so are the sparkling melodies with roots in sub-Saharan Africa. With basic tracking played together live, the fun and immediacy of Sinkane's live show is a central feeling of the recordings. Each one of the four members of Sinkane -- bassist Ish Montgomery, drummer Jason Trammell, guitarist Jonny Lam and Ahmed -- sing and contribute additional parts on the album, with Trammell contributing lyrics to "Theme from Life & Livin' It," and Lam helping with arrangements. Jas Walton and Jordan MacLean of Daptone recording artists Antibalas contributed horns.

In making a record that feels like this, Ahmed's primary intention was to make music that is joyous, but also socially conscious when you scratch beneath the surface. The songs "U'Huh" and "Theme from Life & Livin' It" conjure up the simple pleasures of hanging with friends, but there are heavier vibes in there. Ahmed says, "I remember listening to Bob Marley as a child. Dancing with my family in our living room and then my mother telling me what issues he was addressing, and that it was important to remember those things while listening. It made the music even better because it became about something more."

"Favorite Song" came about from Ahmed's experiences DJ'ing in New York. "As a DJ you're always paying attention to the collective energy in the club. When you play a song that everyone knows, everybody is connected, lost in the music." That song, along with "U'Huh," has lyrics sung in Arabic, Ahmed's native tongue. "Kulu shi tamaam!" means "everything is great!" while "ya zol ya zain!" is a Sudanese term of endearment meaning "my beautiful friend." "It's really easy to understand the tone of those words," Ahmed adds. "They just feel good, you don't have to know what they mean. It's kind of like listening to Caetano Veloso or Jorge Ben -- you don't have to know Portuguese to feel what they're saying."

True to its name, Life & Livin' It is an album about all kinds of experiences. When Ahmed Gallab sings, he sounds unafraid yet vulnerable. But while he once sang of feeling like he was on the planet Mars, Ahmed is now firmly grounded on Earth. He's no longer searching for his home -- he has created a home for himself. There's a party there, and Life & Livin' It is playing on the stereo. You are invited.

Bencoolen has just released a cover video for "Beautiful Escape" by Tom Misch.

Tucked into a backstreet in the eastern part of the Capitol Hill neighborhood of Washington, D.C. is a remarkable, near-magical place: a studio, complete with a live room bathed in natural light, staffed by true believers in the power of records. Ivakota hasn't been open for long, but it's already attracted some of the best musicians on the Eastern seaboard, all anxious to avail themselves of the state-of-the-art equipment and the deeply creative vibe. In short, Ivakota was made for a band like Bencoolen, a D.C. combo with a distinctive sound, instrumental and vocal talent to burn, and a will to lock into a groove and stretch out. Bencoolen filmed the video for "Beautiful Escape," their latest single, on the floor at Ivakota, and it's an understatement to say that these five musicians seem right at home. They look like they were born to be there.

In a way, they were. While Bencoolen's music will feel pleasantly familiar to anybody who loves '70s and '80s rock and soul, the band is an extreme outlier. There's nobody in this act who is just filling space, or hanging in the background, or making room for a singer or soloist to shine. In Bencoolen, everybody contributes, all the time. Drop the (digital) needle on one of their records, and you'll hear drums, guitar, bass, and saxophone – all interlocking, swinging, calling and responding, each instrument responding to what the others are doing, making their presences felt, generating sparks, exhibiting constant creativity. The combo has reminded D.C. of the unparalleled excitement of live music: their concerts have become must-see events, and the coverage in the local press has been celebratory. Naturally, Bencoolen has taken the show on the road, to show the rest of America what the Capitol District already knows.

STIG is the world’s first and finest four-piece power trio. Featuring Ryan Stigmon on the saxophone, Thomson “Soy Boy” Knoles on the keys, Jack McChesney on the drums, and Artie Sadtler on the bass guitar, the band brings their improvised psychedelic funk sound from the hills of Asheville, NC to the eyes and ears of their fans across the US.

The band is inspired by a wide array of music, from the expeditious improvisation of Herbie Hancock and Phish, to the energetic complexity of Snarky Puppy and Meshuggah. Check out a STIG show and you’re guaranteed to be drawn into a dynamic and ever-changing groove that doesn’t stop ‘till the guys walk offstage. No two songs are the same from night to night, giving the band plenty of elbow room to take them in any direction they choose. Between the high-octane improvisation and low-down and dirty FUNK, STIG is not a band you want to miss!

"Adding their own flavor to the funk revival scene, STIG keeps it smooth and sexy, interesting without ever overstaying their welcome."- The Deli Magazine

"Feel-good funk...played with the freewheeling abandon you would hope to hear from a bunch of very young, very talented musicians in the act of discovery."- The Aspen Times