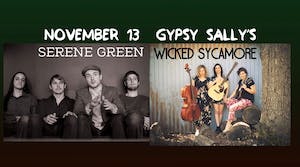 Serene Green is the collective musical vision of Pennsylvania natives Quentin Fisher, Michael Johnson, Shane McGeehan, and Steve Leonard. This band's passion for playing together comes from a mutual appreciation for traditional bluegrass music. The members of Serene Green share a common goal to influence the legacy of bluegrass music with original songwriting and compositions, while honoring the traditions set forth by the pioneers. Since early 2017, Serene Green has toured extensively in over fifteen states throughout the United States of America. The band released its first, all-original studio album, To Whom It Pertains, in June 2017, and its second studio album, Have At It (Patuxent Music), in August 2019.

Wicked Sycamore is an all-female trio hailing from the Baltimore/ DC area, consisting of Juliette Bell on guitar, Lainie Gray on mandolin, and Madeline Waters on cello. Their sound can be described as contemporary folk with a mischievous edge that is grounded in traditional roots music but branches out into Americana and blues. They write original music ranging from fun and light-hearted sing-alongs to deep, introspective tunes for the ages. No matter the genre, their music relies heavily on thoughtful arrangement, instrumental prowess, and intricate vocal harmonies. In 2019, Wicked Sycamore was the winner of the Charm City Bluegrass band competition and their debut EP "Growing Roots" was nominated for Best Folk Album at the Washington Area Music Awards.