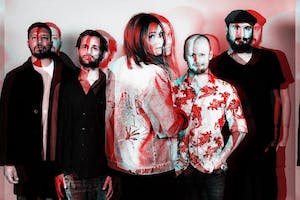 Pleasure Train is a 5-piece rock band hailing from the Washington DC area. Comprised of Valerie Vega (vocals), Rich Fiegel (guitar), Mike Paquette (keys/synth), Will Berger (bass/vocals), and Andrew Gabor (drums/percussion), the band’s influences include psychedelic rock, house/electronica, soul, R&B, jazz, and pop. Pleasure Train has made a name for itself as a behemoth of a live band, combining the indomitable vocal presence of Vega with swirling psychedelic soundscapes that surge into urgent passages of frenetic funk and synth-driven dance pop. The band has contributed memorable sets to music festivals including Yonderville Music & Arts Festival, Not Fade Away Festival, Clarendon Day, and Celebrate Fairfax Festival, and has shared stages with nationally renowned artists including Aqueous, Hayley Jane & The Primates, Midnight North, and Zach Deputy.

The band’s 2017 EP “Volume II” is available on iTunes and all online streaming services, as well as physically in CD form at all live performances. A series of online singles will be released in stages in early 2019. Recorded at Ivakota studios in Washington DC in Autumn 2018, the singles showcase the evolution of the band into a more mature, focused style of songwriting.

Since 2012 this unique group has played with groups like Papadosio, Dopapod, The Werks, Kung Fu, EOTO, Marco Benevento, TAUK, The Verve Pipe, Badfish, Here Come the Mummies, The Main Squeeze and many more. The group takes influence from Frank Zappa, The Grateful Dead, Phish, Charles Mingus, The Band, and Led Zeppelin to name a few.

Desmond Jones puts on exciting and high energy shows and is proud to say that each set list and each song is different from show to show.