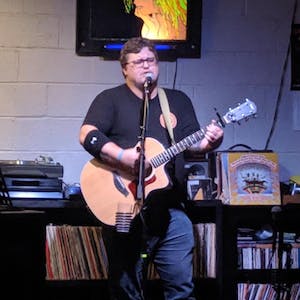 Gypsy Sally's presents a free show in our Vinyl Lounge

iCal
Google
Singer/songwriter from FL, now based in DC

Mitchell Norton hails from the east coast of central Florida where he immersed himself in the early-2000s local music scenes in Daytona and Orlando. Having stalled out with several bands as a guitarist and backup vocalists, he opted to leave music in pursuit of other careers.

But in recent years, Mitchell finds himself writing and recording again, and excited to get back on stage.

Influenced by pop rock bands like Green Day, Foo Fighters, and The Goo Goo Dolls, Mitchell’s musical style relies on simple melodies and songs you can sing along to. He couples his original material with a few popular cover songs for a set that mixes the excitement of hearing new music with the nostalgia of familiar hits.

You can hear more by simply searching “Mitchell Norton” on SoundCloud, Apple Music, Spotify, and most other streaming providers.