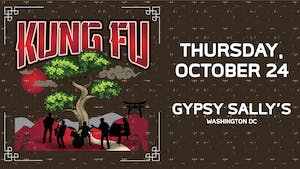 Proud to be firmly installed in the new-funk movement, KUNG FU is quickly

popularizing their unique sonic contribution, blurring the line between intense

again, the band draws on influences such as early Headhunters and Weather

Report, and merges those ideas with a contemporary EDM informed sensibility.

unique and rabid following by commanding audiences at theaters, clubs, and

as "lethal funk", "explosive", "jaw dropping", and "musically mesmerizing". For

the uninitiated, the experience is typically shocking yet the focus is simple: just sit

back and enjoy the ride!

novo is an electro soul quintet from Washington, D.C. Melding elements of jazz, R&B, electronica, and psychedelic rock, the group formed in early 2018 out of an impromptu jam session, during which the members quickly noticed that a fire had been lit. That initial session blossomed into a fully-realized sound, spearheaded by husband-and-wife songwriting duo Gena Photiadis (keys/vocals) and TJ Turqman (bass). Lead vocalist Tula Pisano weaves intricate melodies that are equal parts evocative and beautiful, complemented by guitarist/vocalist Nikhel Sus and drummer Matt Tredwell. The end result is a sound that is melodic, yet distressed. Retro, yet new. And, above all, full of light and energy.

novo's members include some of the most in-demand live and session musicians in DC, who have played with a range of artists locally, nationally, and internationally, including the Funk Ark, Staycation, Gordon Sterling & the People, and more.

In mid-2018, novo will release a series of live session performances, “the basement sessions," featuring several of the group's formative tracks.