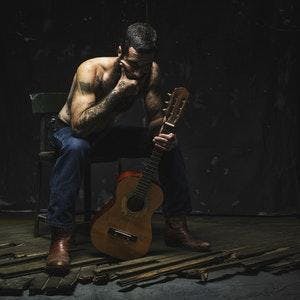 Resurrecting the ghosts of a time when real, hardcore Honky Tonk ruled the airwaves, J.P. Harris has lived the songs he writes with the humor, grit, and grace that only a truly road-worn author can summon. After nearly 100,000 miles and over 200 dates, from Vermont to Louisiana to California, from festival stages to roadhouses you can’t find on a map, the band settled in to record “Home Is Where The Hurt Is.” Released in Fall 2014, the band will pick back up and begin relentless touring throughout 2015 and beyond! If you wanna dance, if you wanna cry in your drink, or if you like scruffy fellas in tight jeans, then look out for J.P. Harris and The Tough Choices.

Karen Jonas is an Americana singer/songwriter from Fredericksburg, Va. Her intensely personal songwriting first grabbed national attention with the release of her critically acclaimed 2014 debut album Oklahoma Lottery, and international praise with her second album, Country Songs. Five years of non-stop touring have produced a smoldering live act that’s culminated in her latest album, Butter, which debuted strongly on both the US and UK Americana charts. She’s shared stages with Dale Watson, Alabama, Joe Ely, Bob Schneider, The Lone Bellow, Brandy Clark, Robert Earl Keen, Amanda Shires and dozens more—lighting up venues around the country from intimate house concerts and listening rooms to rowdy honky-tonks and outdoor festivals, and a recent showcase at SXSW in Austin, Texas. She was recently named “Best Country/Americana Artist” by the Washington (DC) Area Music Awards. Her fourth studio album, “Lucky, Revisited” released on July 19, 2019.