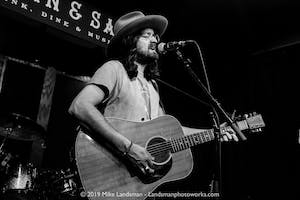 Jason (Jay) Byrd has been a professional guitarist and singer since his late teens. In his home state of North Carolina, he co-founded a blues-rock trio, The Groov, and in 1996 joined the then-Grateful Dead cover band Wavy Train. Byrd's original songs and guitar work helped Wavy Train to forge a sound that combined pop-oriented melodies with extended improvisation.

After moving to the Washington, DC area from North Carolina in 2001, Jay began crafting songs with a decidedly Americana bent. Jay has been a Gold Award winner in the Mid-Atlantic Songwriting Contest, a New Song award winner, and a finalist in the Bernard-Ebb Songwriting Contest. He also toured nationally with DC-area band South Rail, which has released three EPs, including Stars (2014), produced by Don Was.

In early 2018, South Rail released The Complete Track, an anthology of their recorded works. In addition to his output with Wavy Train and South Rail, Jay has released two albums under his own name: Busy Day (2003) and Waste/Hoping (2011). He currently performs as a solo artist, as a guitarist in several area bands, and fronts the Americana/Rock ensemble Jay Byrd & The Musical Trust.