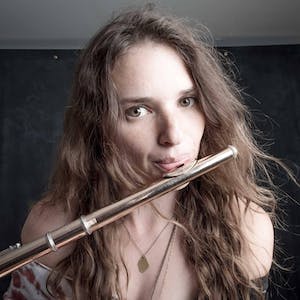 Gypsy Sally's presents a free show in our Vinyl Lounge

The future of jazz can be heard in Gina Sobel’s music. She’s known for her improvising prowess on flute, and is an accomplished vocalist, saxophonist and composer. Her music features keen lyrics and expansive melodies, and brings together elements of funk, modal jams and found sounds. Gina is a consummate bandleader and an eager collaborator, all in the service of making good music.

Gina plays with musicians in genres ranging from hip hop to bluegrass. She released a solo album called World’s Getting Loud in 2016, which acts as an internal travelogue, filled out with lush layers of stratocaster and voice. Gina is currently working on an album with her newest project, a live-composed funk collective called Choose Your Own Adventure, which builds tight, catchy tunes from the drums up.

Gina tours regularly around the United States. She is currently a Strathmore Artist in Residence pursuing her original compositions, and part of the Virginia Heritage Foundation’s apprenticeship program, studying with Susan Gaeta.