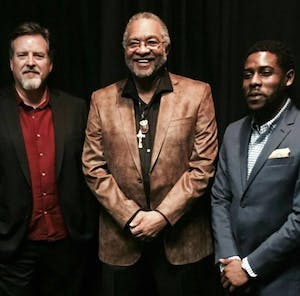 In Dec of 2013, I got a call from The Maple Leaf booking agent, Ms Paulina Trujillo asking if I could fill in a few Mondays at The Leaf when Jon Cleary was out of town. She asked if I could put together a trio. I said yes give me a couple of days and I'll get back to you. She had three Monday's in Dec. the 16th, Dec 23rd and Dec. 30th open, the next day I called back and took the gigs.

On Dec 16, 2013 the band was Michael Lemmler, Simon Lott and myself , it was completely off the hook and I remember having so much fun that I wanted to do it more.

I always have so much musical fun working with Michael Lemmler so he was naturally my first choice for a keyboard player, Terrence Houston wasn't available that night so I asked Simon Lott, knowing that I was going to eventually work with Terrence as the drummer for this gig (I just love his energy). I also thought this might be another way to keep my Runnin' Pardners band members working. I had planned on using each one of them on every different Monday night.

The second week on December 23 it was Terrence Houston and Brint Anderson and we kind of highlighted some of my old friends with a blues jam featuring music from Earl King and Snooks Eaglin.

The third week December 30 was a free-for-all with Terrence Houston on drums and Khris Royal on every instrument he could bring out of his house, LOL. We played so much music that night, we just looked at each other at the end of the gig there was nothing more to say — it was just great.

So who and what is the Porter Trio? That's a great question I'm not sure if I have a real answer other then it is three experienced musicians coming out to play together, no rehearsal, no set lists, no idea of what's going to happen. We are there to listen and play off of each other as best as three musicians can play to present a series of songs that are organically played in that moment. The song choices are always different. We are never certain where we are going to go as we play everything from my own music, to blues, soul and good old rock n roll. In the past year the core has become Michael Lemmler, Terrence Houston and myself but you never know who is going to join us.

Online ticket sales end at 5pm on day of show. Tickets will be available at the door unless marked as sold out on the website

All Tickets are Nonrefundable