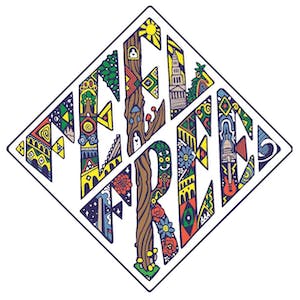 Formed in 2010 in Alexandria, VA on the outskirts of Washington D.C., FeelFree’s smooth sound incorporates hard hitting horn lines, tasteful guitar work, and memorable melodies. They independently released their third album "Define the Free" in July of 2018 after premiering their single "Lonely Life" with critically acclaimed Rootfire Cooperative. The album would go on to win Best Reggae Album of 2018 at Washington D.C.’s 31st annual Wammie Awards.

The roots of FeelFree were first laid in 2004 when Andrew Pfeiffer (vocals/guitar/trombone), Evan Hulehan (guitars/vocals/production), and Bryan Frank (drums) began playing music together while enrolled in George Washington Middle School in Alexandria, VA. After adding Garrett Clausen on bass/vocals/saxophone and Colin Cantfil on trumpet in 2010, FeelFree was officially formed. The band immediately began releasing songs on the internet over the course of 2010-2013 resulting in two albums worth of material: In The Hills (2012) and The Ebb Tide EP (2013). Word about FeelFree’s explosive live show began spreading throughout the mid-Atlantic region creating an underground buzz landing them on stages like D.C.’s 930 Club and Baltimore’s Soundstage among others.

The Elegant Plums started as a four-piece band out of the Northern Virginia/Washington D.C. area, and have since flourished into a Five-piece group calling Denver, CO and the Rocky Mountains Home. Members of the band have influence from all realms of the music world and have brought those sounds together to create a sweet stew of many genres. From blues, to rock, to funk, bluegrass, and so much more, the Plums do it all with each song based around improvisational jams. With soothing yet powerful vocals and guitar from Taylor Stevens, hard-hitting keyboard solos from Devin Galloway, intricate drum rhythms from Danny Price, and funky bass lines from our dude Mike Tynan, the Plums always keep the crowd dancing and begging for more. To know The Elegant Plums one must experience their fun blend of diverse originals, and creative, curveball covers that can turn any normal evening into an elegant one