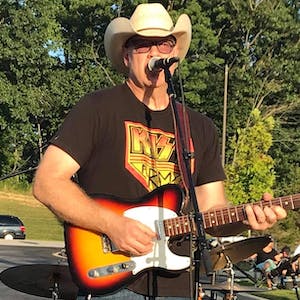 iCal
Google
This event is free and open to the public, no ticket required

"One of the best country singers going right now is not from Texas or from Tennessee — he’s from Baltimore and his name is Arty Hill. He’s also is a first-class songwriter..." - San Antonio Express

"Some call this music modern honky tonk. Heck, this is the way country music should sound, period." - Elmore Magazine

From Baltimore, MD to Central Texas, Arty Hill is packing the bars and dance floors with his unique brand of Modern Honky Tonk. He sings with an "'everyman' quality…reminiscent of Johnny Cash." (Vintage Guitar Magazine). His songs - marrying the soul of classic country with the wry storytelling of Guy Clark and Townes Van Zandt - have been recorded by Rockabilly Queen Bee Marti Brom, Austin’s Texas Sapphires, the Grammy-nominated Kenny and Amanda Smith Band, and award-winning Alt-Country pioneers Jason & the Scorchers. His latest recording, Heart on My Dirty Sleeve, is a two disc collection of original honky tonk and bluegrass recorded with the Long Gone Daddys and the bluegrass-flavored outfit Smooth Kentucky. The result is a recording that both connects to hillbilly music's origins and expands on them in beguiling ways. "No-bullsh*t honky-tonk hero carries the torch for the hard-livin', harder drinkin', troubled sweethearts of unaffected real-talk country." - Brandon Soderberg, Baltimore City Paper